ITALIAN JOURNEY XXI – The Gaze We Turn on the Other

Exploring the Other: A Voyage of Discovery

The nature and the implications of travel have changed profoundly since the days of Johann Wolfgang von Goethe’s Italian Journey. Hosted in the rooms of the Casa di Goethe in Rome and curated by Ludovico Pratesi, the exhibition VIAGGIO IN ITALIA XXI – Lo sguardo sull’altro (ITALIAN JOURNEY XXI – The Gaze We Turn on the Other) is a voyage through the works of eight artists belonging to different generations, and an intense dialogue between Italians and Germans on the theme of journeys in the twenty-first century. Italy has forever been a place of passage, cultural exchange and migration, and somewhere foreign travellers arrive filled with expectation, only to encounter a less romantic, less ideal and often contradictory reality.

As Gregor H. Lersch, the Casa di Goethe’s Director, underlines, “The exhibition takes its inspiration from Goethe’s Italian Journey and addresses the question of what travel means in our own day and age.” Invited to reply to the question, “How do you relate to others?”, the artists have presented thirty-four works executed in a variety of techniques, arranged as “moments” in what is effectively a collective conversation addressing the exhibition’s overarching theme from different points of view. The question of our relationship with otherness has become a crucial and urgent one, at a point in history when emergencies seem to have become the disconcerting norm, in a Europe confronting increasingly pressing issues that include migration, gender diversity, climate change, the affirmation of minority identities, and the pandemic-related restriction of freedoms.

The gaze we turn on others is therefore the common thread running through a commentary by turns ideological and evocative, accusatory and metaphorical, confronting visitors with a series of reflections on the present-day world and the contradictory tensions that pervade it, which the artists have interpreted in complex and often far-seeing ways. As the curator Ludovico Pratesi explains, “Twenty-first-century Italy is an integral part of Europe, and shares in Europe’s present and future, among other things thanks to the responsibility shouldered by artists who accept difficult and complex challenges.” Using media ranging from video to painting, the eight exhibiting artists illustrate diverse points of view in works that are powerful impactful, politically, anthropologically, socially and conceptually.

From Francesco Arena’s observations noted while travelling and Johanna Diehl’s snapshots of the physical loci of power in Rome, to the surrealism of Benedikt Hipp’s paintings and the masked men in Sardinian folk costumes who people Guido Casaretto’s video, the rooms of the Casa di Goethe become the setting for a dialogue exploring the relationship between Italian and German art, a dialogue invoking and watched over by the figure of Goethe – the exhibition’s guiding spirit.

Esra Ersen (born in Ankara, 1970, she lives and works in Berlin) presents Diario [Diary], a group of photographs taken in Rome in 2020 and 2021 – images of small piles of rubbish swept up by illegal immigrants from Africa who leave them lying all day long on the tarmac of the city’s streets, with little boxes next to them ready to accept donations. These are the traces of a clandestine, silent population that the city pretends to know nothing about – a city languishing in the grip of a waste disposal crisis which has been afflicting her for years now, as has the problem of the growing number of refugees crossing the Mediterranean. “The little piles of rubbish are therefore much more than they appear to be: each sweeper is working on a portrait of Roman society and, with every new pile, leaves an additional trace – that of their own presence,” explains the artist, whose work reflects on social and anthropological themes, interpreted in original and often subversive ways. Esra Ersen was awarded the Rome Prize fellowship at the Deutsche Akademie Rom Villa Massimo in 2019.

Francesco Arena (born in Brindisi in 1978, he lives and works in Cassano delle Murge) presents three sculptures from the series Paesaggi [Landscapes], made in 2022 and exhibited here for the very first time. On brick-like, rectangular blocks cast in bronze, the artist has inscribed a phrase in Italian and in English, written in capital letters, as if it were a rapidly scrawled note serving to fix a fleetingly observed image in the artist’s mind. Compared with Arena’s previous work, based on the documenting of traumatic collective experiences, these “landscapes” introduce a more intimate and private dimension to his research. “This is slow work about something apparently fast – in other words, the noting of a landscape glimpsed while travelling.”

Guido Casaretto’s video Crossing Carnevale (2019) reimagines an ancient, pre-Christian tradition: Sardinia’s Mamuthones, who, legend has it, set out from Sardinia and crossed the sea to Liguria in order to kill a member of another tribe, who served as a sacrificial scapegoat. Casaretto (born in 1981 in Istanbul, where he lives and works), instead sets the story in the stark, arid landscape of the salt lake of Tuz in Anatolia, paraphrasing the migration of symbols and ancestral rituals across the Mediterranean. The decision to present this particular work at the Casa di Goethe seems especially apt because of the suggestive parallels to be drawn with the German author’s appropriation of the Roman tradition of carnival masks in Faust, Part Two (published in 1832).

The installation by the artist Johanna Diehl (born in Hamburg in 1977, she lives and works in Berlin) brings together 18 photographs from three different series (Borgo, Romanità and Alleanza) dating from 2011 to 2015. The images document the triumphalist and arrogant aesthetic of Fascist architecture, contrasting the new settlements (known as borghi) that were built for propagandistic motives all over Italy and the romanità (the patriotic Roman spirit) of the public buildings erected in the capital and intended to evoke the glories of Imperial Rome; while Alleanza (alliance) is a visual record of the spaces and places born of the relationship between the Catholic Church and the Fascist State following the signing of the Lateran Pacts in 1929: a sort of “Grand Tour” of the architectural face of the Fascist regime, which – troublingly – risks becoming newly relevant. Johanna Diehl was awarded a fellowship at the Deutsche Akademie Rom Casa Baldi in Olevano Romano in 2016.

“I consider violence to be a language and I believe the domestic environment is the first place in which we learn to accept that violence is possible,” declares Silvia Giambrone (born in Agrigento in 1978, she lives and works in Rome and London), who has created a work specifically for this exhibition. The artist’s research often explores the theme of violence against women and femicide, which are so common in societies like Italy where sexism is still rife. Here she presents a work in which it is words that convey a message about – and testify to – a form of suffering all too often unvoiced and unmentioned. Off the pain (2022) is a silent but dramatic portrait of a hidden and almost unbearable misery, in which texts and images combine to form a searing chronicle of a kind of distress which – in a distracted and superficial society that frequently ignores them – can lead human beings to self-destruct.

In a profoundly poetic diptych, Alessandro Piangiamore (born in Enna in 1976, he lives and works in Rome) transforms a detail from his everyday world into a spiritual and almost mystical vision. Composed of two works in mixed media on “Qualche uccello si perde nel cielo” [Some Birds Get Lost in the Sky] (2022) takes the viewer on a journey into a sky where the traces left by passing birds hint at paths taken through the heavens. The traces they leave are given a new nobility by the attention that Piangiamore pays to this vortex of gauzy, delicate objects – the favoured subjects of an artistic practice focused on bringing to life and giving solid form to that which is by nature ephemeral or nebulous: a puff of wind, an intense aroma, the colours of Sicily’s soil.

Irony and provocation are ever-present elements in the work of Jankowski (born in Göttingen in 1968, he lives and works in Berlin), whose video installation Casting Jesus (2011) offers a subtle and irreverent analysis of the figure of Christ as a modern-day show-business and mass-media phenomenon. With a wink at Hollywood and another wink at Jesus Christ Superstar, the artist auditions 13 actors for the role of Jesus, to be selected – by a panel of figures from the Vatican – on the basis of performances and try-outs in which the actors perform miracles and carry the cross. Filmed in the solemn setting of the Santo Spirito in Sassia complex, an ancient pilgrim hospital, Casting Jesus thought-provokingly recasts a millennia-old iconography to fit the modern world of reality TV and social media. Christian Jankowski was awarded the Rome Prize fellowship at the Deutsche Akademie Rom Villa Massimo in 2010.

In the painting in oil on wood hat Benedikt Hipp (born in Munich in 1977, he lives and works in Finning) has created for this exhibition, we see two figures engaged in a sort of battle between opposing forces, opposing tensions and contrasting energies. The artist suggests it can be read as a journey, based on the idea that travel is a crossing of boundaries, traversing different physical and mental terrains, personal and collective situations, social bodies and individual identities. Today’s world is a gigantic melting pot in which human beings mix, mingle and confront one another in an increasingly divided and contradictory global society: for Hipp, a journey can therefore be a metaphor or a desire; it can be physical or virtual, an embrace or something oppressive; it can take the form of sensuality or violence.

With the kind support of 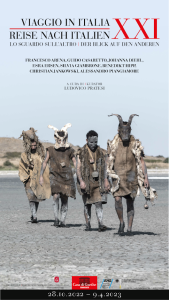 The Gaze We Turn on the Other 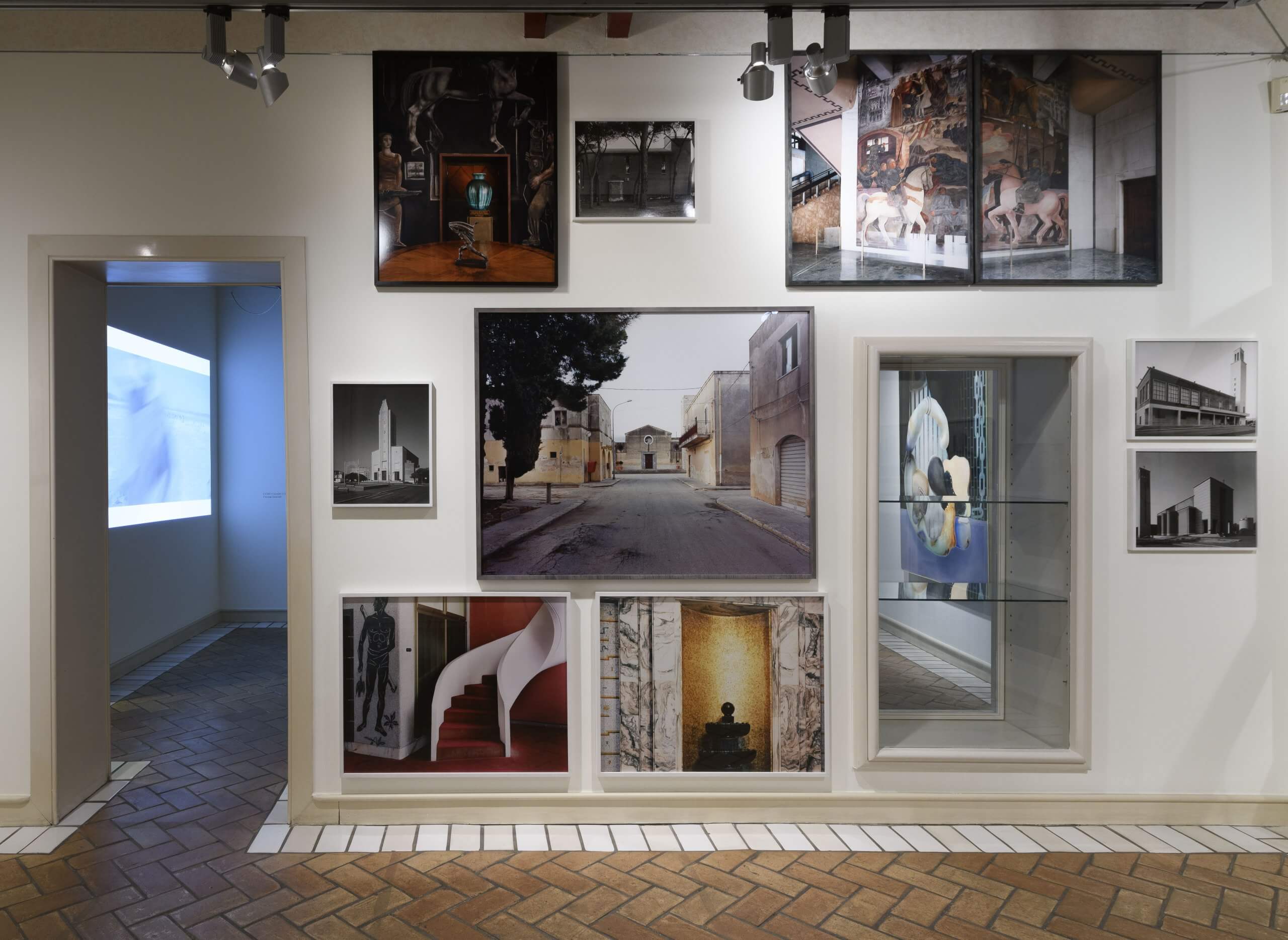 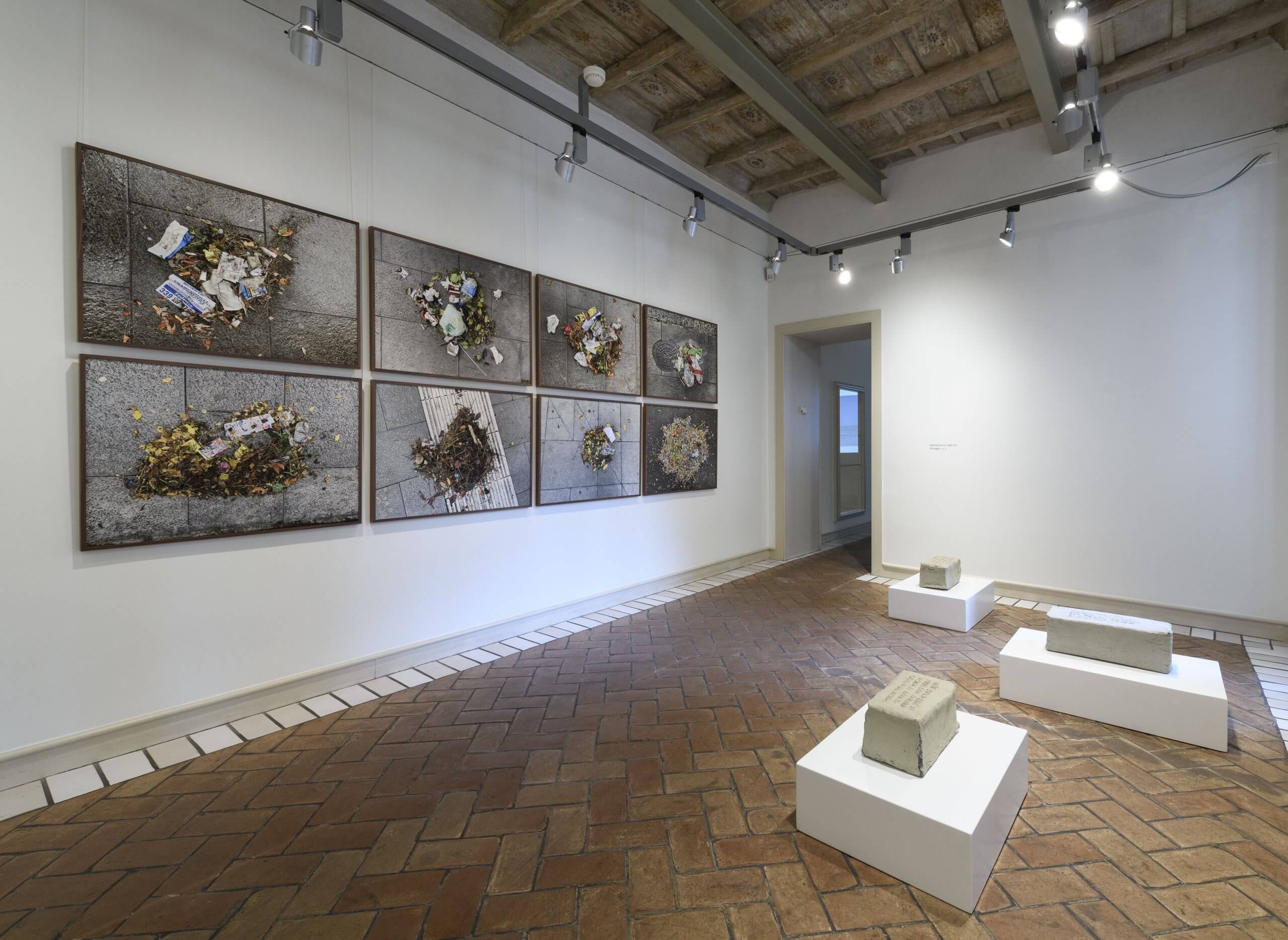 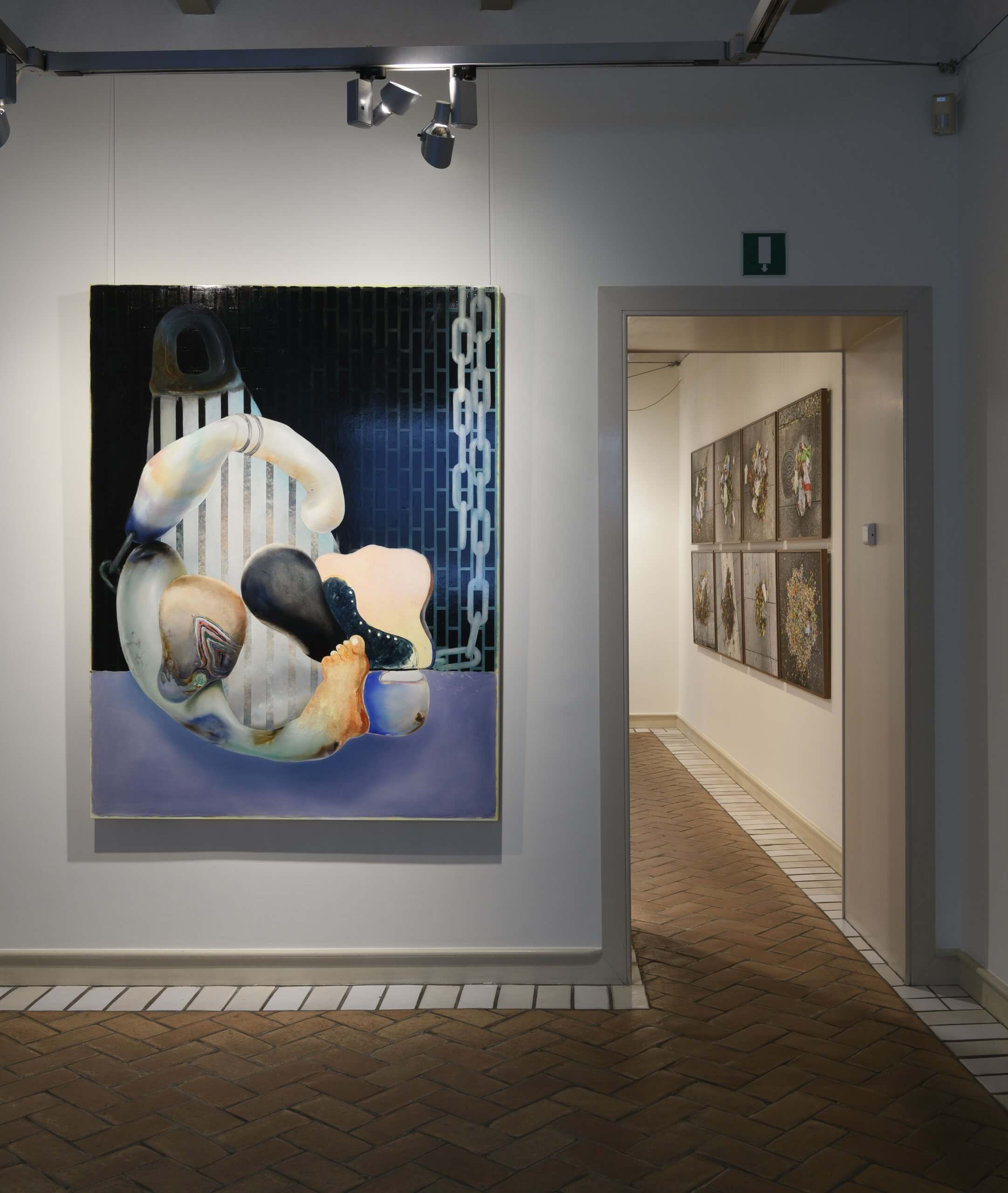 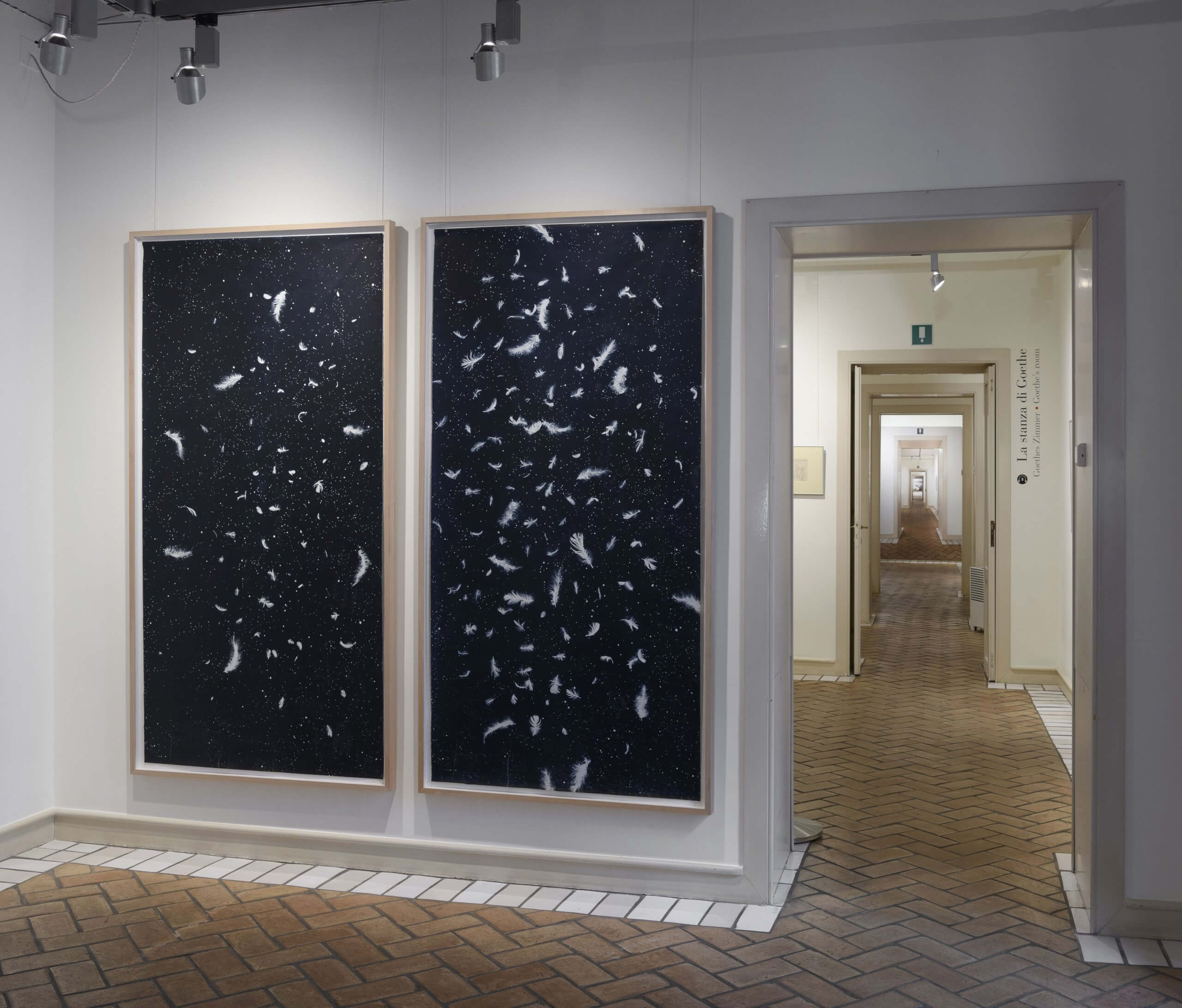 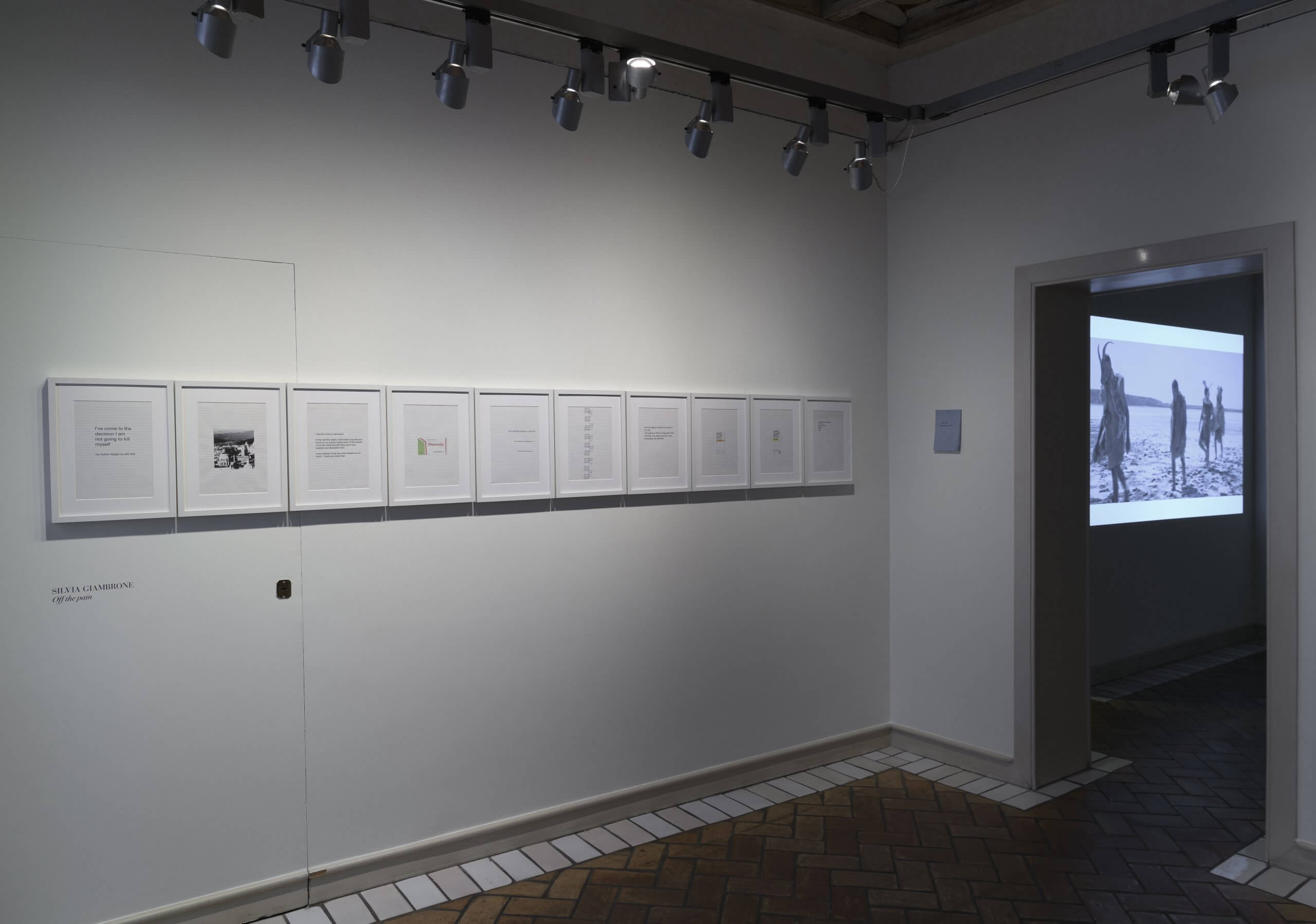