An Address with a History

The Roman address “Via del Corso 18” became famous after Goethe’s stay here in the years 1786-1788. There are, however, quite different tales to tell about the house that was built at the end of the 16th century and its inhabitants. In the publication “Via del Corso 18, Rome – An Address with a History”, Dorothee Hock portrays the chequered history of the house and its inhabitants throughout the centuries using extensive graphic material, some of which has not been published before.

Via del Corso 18, one address, numerous stories: a persecuted Jew in occupied Rome and a courageous concierge’s wife. The first German writer to be awarded the Nobel Prize in Literature: Paul Heyse. A Prussian police officer on the run in the new Kingdom of Italy. The Bracci family who descended from the famous sculptor Pietro Bracci and who was the owner of the property on the Corso for more than 130 years. An influential 16th century Roman notary public. Craftsmen, clergy, artists, large landowners. Shops, studios, law practices, room lets. Germany’s greatest poet: J.W. Goethe.

During the course of the research, which was begun in 2008, the author also found archive material on the Goethe memorial plaque of the City of Rome, mounted in 1872 – the first to be dedicated to a foreigner. Furthermore, early drawings and photographic images of the house on the Corso that were previously unknown, or believed to have been lost, were discovered.

In 2018, the most recent discovery could be published in the 2nd Italian edition: the Russian writer and philosopher Alexander Herzen (1812-1970) lived in this house for some time too. 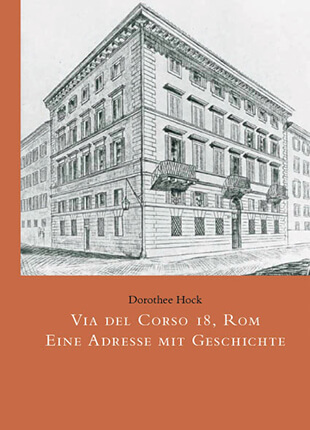